WARRINGTON, Pa., March 25, 2021 /PRNewswire/ -- Windtree Therapeutics, Inc. (NasdaqCM: WINT) ("Windtree" or the "Company"), a biotechnology and medical device company focused on advancing multiple late-stage interventions for acute cardiovascular and pulmonary disorders, today announced the closing of its previously announced public offering of 9,230,500 shares of its common stock, par value $0.001 per share, together with warrants to purchase up to 9,230,500 shares of its common stock. Each share of common stock was sold at a public offering price of $3.25 per share of common stock, together with a warrant to purchase one share of common stock. Each warrant has an exercise price of $3.60 per share, is exercisable immediately and expires on the fifth anniversary of the date of issuance. The shares of common stock and the warrants were immediately separable and were issued separately but were purchased together in this offering. 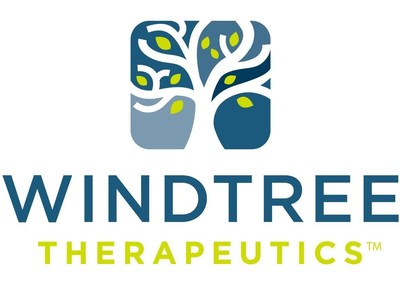 Windtree received gross proceeds of approximately $30.0 million, before deducting underwriting discounts and commissions and other estimated offering expenses. All of the shares of common stock and warrants in the offering were sold by Windtree.

Windtree intends to use the net proceeds from the offering, together with other available funds, for the continued advancement of its lead product candidate istaroxime, a first-in-class, dual-acting agent being developed to improve cardiac function in patients with acute heart failure as well as in early cardiogenic shock, including for start-up activities for a second phase 2b clinical trial in acute heart failure, and for the development of its other pipeline product candidates and for working capital and general corporate purposes.

The offering was conducted pursuant to Windtree's shelf registration statement on Form S-3 (File No. 333-248874) previously filed with the Securities and Exchange Commission ("SEC") on September 17, 2020, and declared effective by the SEC on September 29, 2020. A final prospectus supplement and accompanying prospectus relating to the offering has been filed with the SEC and is available on the SEC's website at http://www.sec.gov. Electronic copies of the final prospectus supplement and accompanying prospectus relating to this offering may be obtained from Oppenheimer & Co. Inc., Attention: Syndicate Prospectus Department, 85 Broad Street, 26th Floor, New York, NY, 10004, by telephone at (212) 667-8055, or by email at equityprospectus@opco.com; or from Ladenburg Thalmann & Co. Inc., Prospectus Department, 640 Fifth Avenue, 4th Floor, New York, New York 10019 or by email at prospectus@ladenburg.com.

Windtree Therapeutics, Inc. is advancing multiple late-stage interventions for acute cardiovascular and pulmonary disorders to treat patients in moments of crisis. Using new clinical approaches, Windtree is developing a multi-asset franchise anchored around compounds with an ability to activate SERCA2a, with lead candidate istaroxime being developed as a first-in-class treatment for acute heart failure and early cardiogenic shock in heart failure. Windtree has also focused on developing AEROSURF® as a non-invasive surfactant treatment for premature infants with respiratory distress syndrome, and is facilitating transfer of clinical development of AEROSURF® to its licensee in Asia, Lee's HK, while Windtree  evaluates other uses for its synthetic KL4 surfactant for the treatment of acute pulmonary conditions including lung injury due to viral, chemical and radiation induced insults. Also in its portfolio is rostafuroxin, a novel precision drug product targeting hypertensive patients with certain genetic profiles.

For more information, please visit the Company's website at www.windtreetx.com.